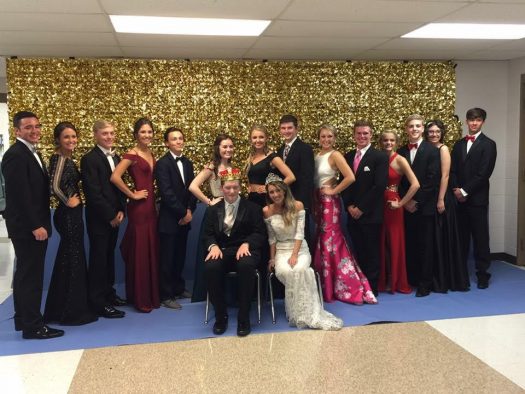 As fall approaches, the students at Hanover-Horton look forward to Friday night football games. This year, the game the students and players were most excited about was Homecoming.

“Not only the football game, but the whole week is a ton of fun.” Jacob Sauber, senior said.

The dress up days for the week were Pajama Day, Twister Day, Team Day, Flannel/Camo Day, and Comet Day.

“I think participating in spirit week is the best part of homecoming, it’s like a competition between the grades to see who can win with the most spirit points.” Mitchell Schuette, senior said.

The homecoming court members all looked great during the halftime ceremony, as they were voted on from their fellow classmates. There was one boy and one girl representative for the freshman, sophomore, and junior class. As for the senior class, there were five boy and five girl representatives.

Each senior court member had a chance to win the crown, but two very deserving individuals took over the night.

“I was shocked when I got crowned.” Deavynn Gumper, 2017 homecoming queen said.

Gumper explains how she loves spending time with her friends, and knowing that they all voted for her made her night even better.

The 2017 homecoming king was Austin Keeler, as he was so excited when he hard his name announced as the winner.

“It was a fun week. From float building to powderpuff, and the football game, it was a great last homecoming I will never forget.” Jayden Bahlau, senior said.